Brutalism and the cellar-find paintings.

I was interested to learn that the term Brutalism derives from a French term for raw concrete.

Taken from the Tate website:- ‘Brutalism is an architectural style of the 1950s and 1960s characterised by simple, block-like forms and raw concrete construction The term was coined by the British architectural critic Reyner Banham and originates from the use, by the pioneer modern architect and painter Le Corbusier of ‘beton brut’ – raw concrete in French.’ 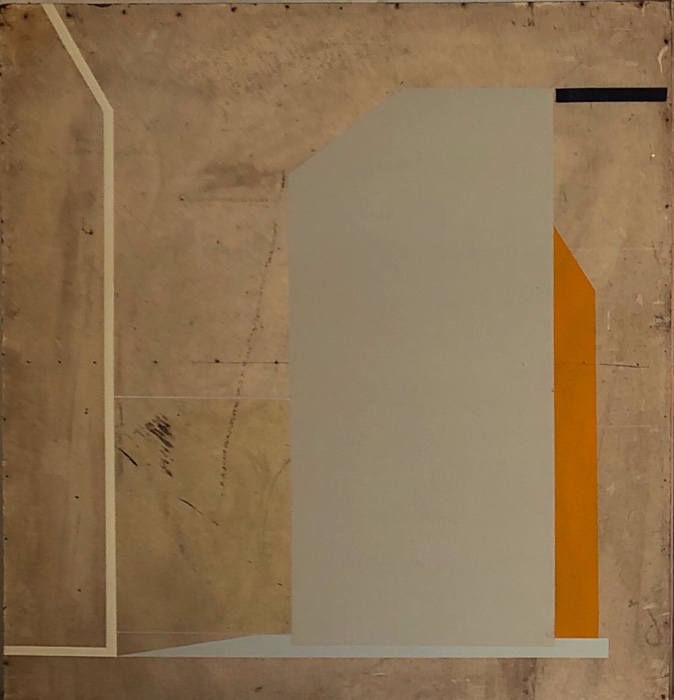 When we moved into our house there was quite a bit of junk in the cellar, an old step ladder for example which I made into an easel and a set of shelves for my studio. We got rid of most of the junk but I kept two panels, they were just hardboard sheets with a basic wooden frame as support. I still don’t know why I kept them, but years later, in summer 2018 we were having a clear-out and they just seemed to fit perfectly with an idea that had been forming at the back of my mind. Namely, painting on found surfaces and leaving areas visible as part of the composition.

(Apologies for the poor photographs – these weren’t around in my studio long – straight out to a gallery!)

I’d envisioned using tabletops, the wood grain adding warmth and texture to the painting but the surface I found on these panels was even better. They were painted a light ochre colour and had gained layers of dirt and various scratches over the years, they also had intriguing black areas. I still have no idea why or when they were made! The surface reminded me of the kind of concrete buildings that were heavily influencing my painting at the time and I’d been wanting to make work using an even more simplified language of those Brutalist shapes and facades.

I spent months working on these as I knew how important each application of paint was, once dry I’d have no way of altering the composition and returning to the original dusty patina. I thought long and hard about each shape that makes up these two brutal abstracts.

These were quite different to any paintings I’d produce before but I feel they informed the direction of my subsequent work.